GIGABYTE Z390 AORUS XTREME: A mainboard without any weak points

The introduction by Intel of the ninth generation Core processors aka “Coffee Lake refresh” and Z390 chipsets able to support all the features, has pushed all the main mainboard manufacturers to renew their price lists with several models able to satisfy the most disparate types of users.

GIGABYTE, as usual, has certainly not disappointed the expectations of its most loyal customers, putting on the plate a large number of cards including, for quality and functionality offered, stand out without a shadow of doubt those of the AORUS Gaming series. 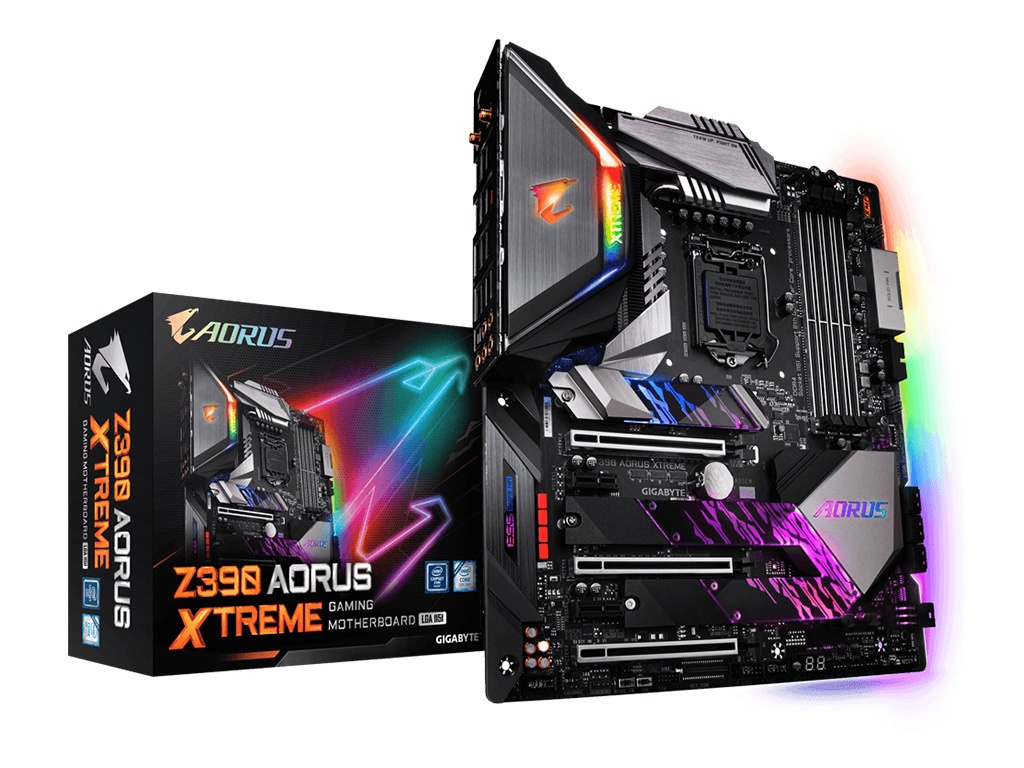 The latter will be the subject of today’s review, in which we will analyze it in detail to discover all the merits and possible faults.

The technical specifications of the card are clear, it is a product aimed at a particularly demanding customers as it is able to offer, in addition to the usual quality and reliability of the other AORUS Gaming, an exclusive range of features and accessories from real top of the range .

Designed to better manage the new 9th generation Intel processors, in particular the powerful Core i9-9900K with its 8 cores and 16 threads, the Z390 AORUS XTREME adopts an E-ATX form factor and is equipped with a double PCB copper layer (2 Oz) and a power supply system really over the top with a 16-phase digital VRM driven by a PWM IR35201 controller that includes 16 MOSFET TDA21462 60A and 8 IR3599 Phase Doubler with automatic balancing of the same. 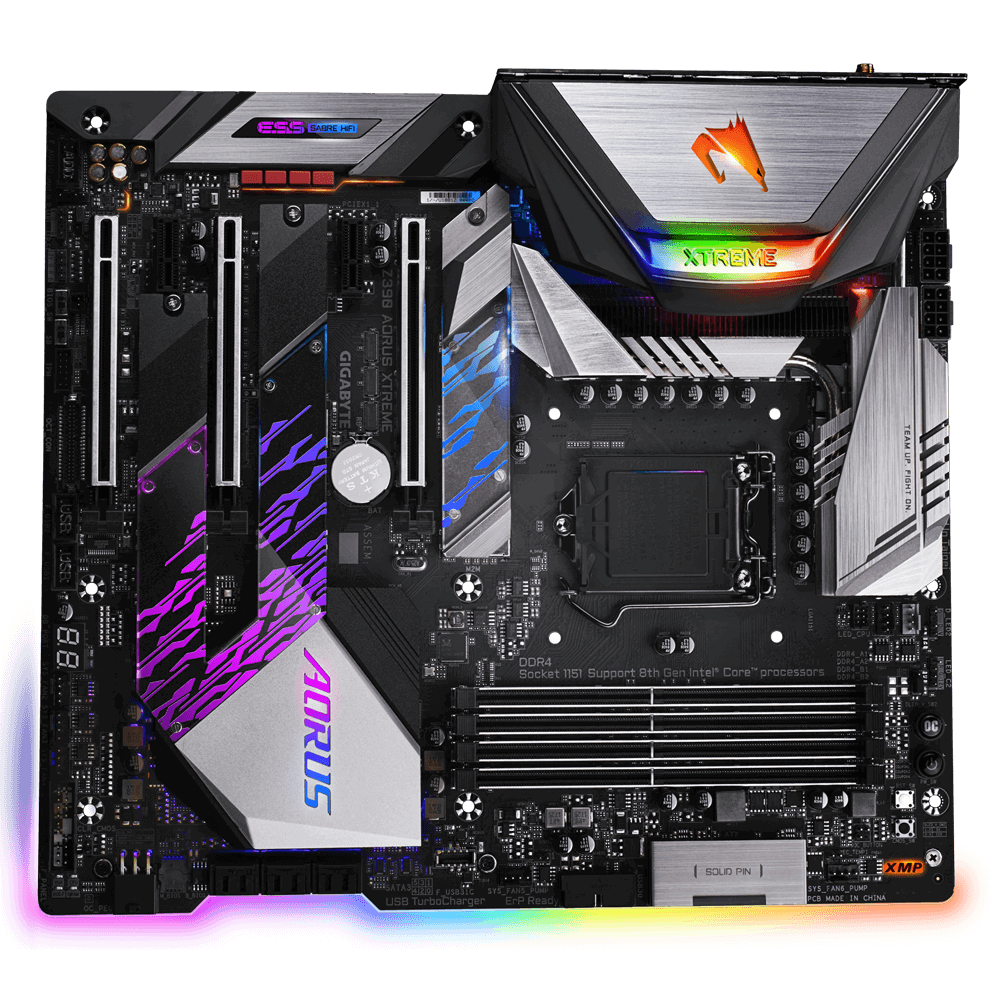 This section has a heat dissipation increased by 300% thanks to the use of the same technology implemented on the heatsinks of high-end video cards, which provide for the adoption of a dense body of aluminum fins and heatpipes in direct contact with components from to cool, obtaining a temperature drop of about 40% compared to standard solutions.

This technology has been further improved through a design in which the first two heatpipes directly cool PowIRstage and inductors, while the third and fourth increase the contact between the heat sink and the components of the printed circuit on the back.

There is also a powerful metal reinforcement with the triple function of strengthening the PCB, protecting the LED strip positioned along the front edge of the board and encouraging the cooling of the numerous components present therein.

The same is characterized by a surface treatment in nano-carbon that, according to the manufacturer, improves the disposal of the heat produced by the components in contact with it through the special thermal pads produced by LairdTech, also used for the VRM section.

The presence of a double 8 + 8 pin EPS connector with Solid Pin technology, finally, which involves the use of all-metal elements instead of the empty ones inside, both for the above-mentioned connectors and for the 24-pin ATX, intelligently rotated through 90°, it guarantees that the power section receives all the necessary energy, especially in the most critical load conditions. 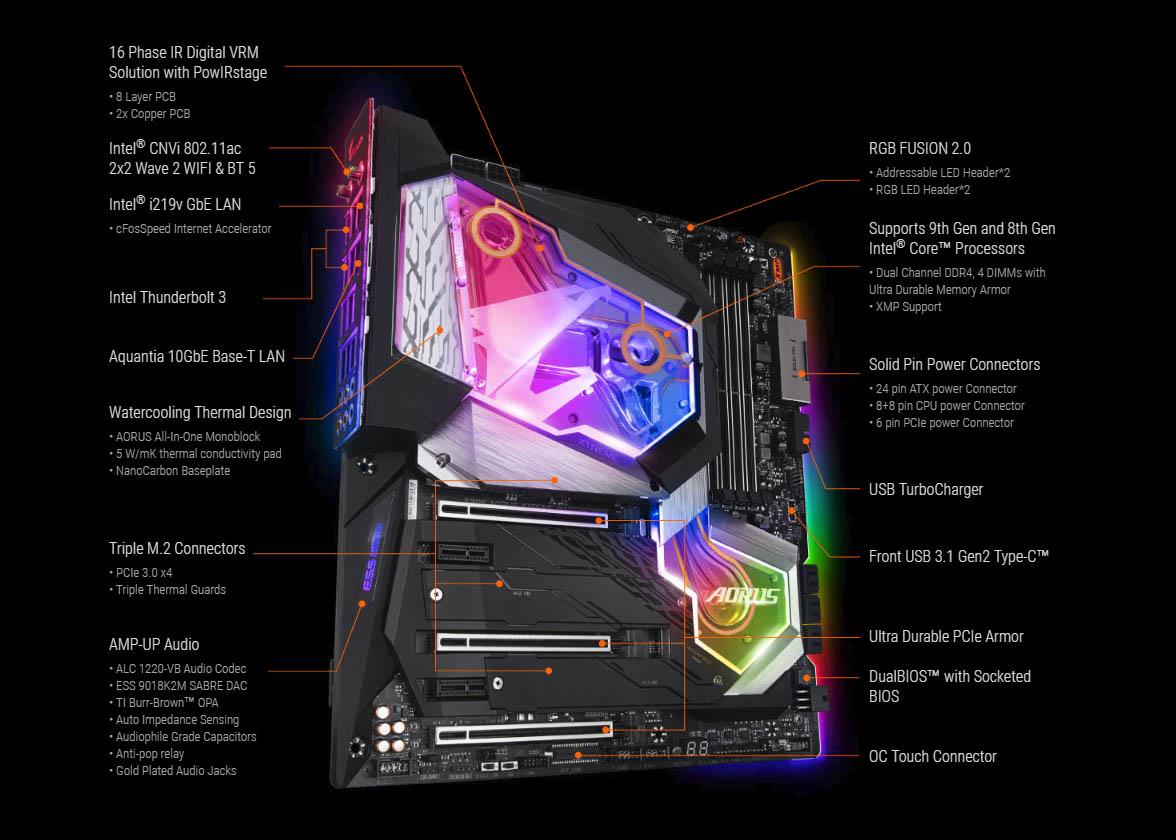 Four DDR4 DIMM slots provide support on the AORUS Z390 XTREME for up to 128GB of DDR4 (thanks to the latest BIOS) with a frequency of 4400MHz (OC mode).

At the same level, the network dedicated to networking that uses two Gigabit Ethernet ports, respectively, driven by an Intel i219V controller and a very fast Aquantia AQC107 10 Gbps, an Intel Wireless 802.11ac Wave 2 module (2TR2 & Bluetooth 5.0) that guarantees speed higher downloads even in the presence of intense network traffic with peaks up to 1734 Mbps when using 160MHz channels, able, therefore, to rival on equal terms with the best wired solutions.