Home Tech News Should Laptops and Other Tech Gadgets Be Allowed in College Classrooms?

Should Laptops and Other Tech Gadgets Be Allowed in College Classrooms?

The argument concerning whether or not laptops, tablets, and other technological devices should be allowed in class is a divided one. Yet, as technology advanced, an answer is becoming more and more imperative. Interestingly, several studies have yielded divergent results that have shaped public opinion on the debate in different ways.

They Should be Banned

This view maintains that laptops, tablets, and other technological devices are ultimately a distraction and not at all appropriate for classroom use. Some extremists in this camp go a little further and claim that laptops open the door to deviant behavior when the student should otherwise be learning and focusing on their coursework. While there are some aspects of this view that definitely ring true for my college experience, I think it misses some important aspects of the arguments that the next two views grasp. How and why it misses this view is largely due to its adherence to dogmatic principles rather than an openness to historical and technological change. 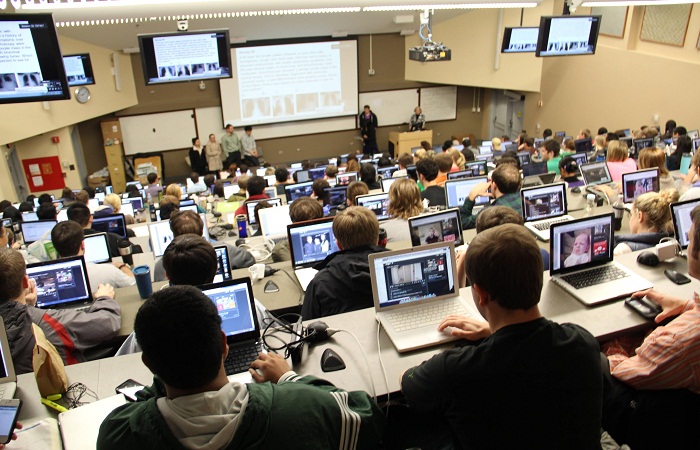 They are a Necessary Evil

This argument acknowledges the potential pitfalls of allowing laptops, tablets, and other technological devices in the classroom, but ultimately maintains that their benefits will eventually supersede their detriments. They see the potentials of technology-integrated learning and are open to the idea that technology is not always a distraction–with some even going as far as to suggest that casual distraction itself is not necessarily a bad thing. However, this view also maintains that laptops can prove to be distracting to people if their objective is not to pay attention–which, in an academic setting, may just be the case.

Yet another argument states that technology is inevitable and we all may as well get used to it. This view refrains from ascribing a value judgment to in-class technological devices–rather, it is more concerned with the material state of technology in that as time progresses technology will become more and more democratized, leading to a greater prevalence in classrooms and learning institutions.

Whether your goal is to be a tech in the classroom at Sarah Lawrence College, or figure out whether USC offers a library science degree online, the argument concerning laptops, tablets, and other technological devices could eventually end up impacting your learning. Imagine relying on a laptop for notes and organization and taking a class with a professor who forbade them.