Home Gadget LumiWatch, the smartwatch with a projector that would transform our arm into a touch screen

LumiWatch, the smartwatch with a projector that would transform our arm into a touch screen

It is a somewhat futuristic idea, but over the years we have known projects and ideas that seek to provide smartwatch with functions that go beyond a simple clock with a screen. Just remember that Cicret Bracelet, which was more in good intentions. And now, under almost the same idea we get the LumiWatch, which to everyone’s surprise, is a project of Carnegie Mellon University, which means that at least one prestigious institution is behind.

The LumiWatch is presented to us as a functional prototype equipped with a laser picoprojector that would seek to transform our arm into a tactile surface, whose size, they claim, would be very similar to a smartphone screen.

LumiWatch would count not only with the laser picoprojector, but also with a matrix of sensors that would allow us to interact on the projections in our arm, where we would have the ability to give small touches, exert pressure or slide to create gestures, as if it were the screen of our smartphone.

One of the biggest challenges, according to those responsible, has been to project the image on a surface as irregular as our arm or the back of the hand, since it is done at a low angle and on a curved surface. For that reason they would have created a combination of software and hardware that processes the image and eliminates the distortion, thus being able to project an image without deformations of 1024 × 600 pixels over the entire length of the arm without losing brightness. 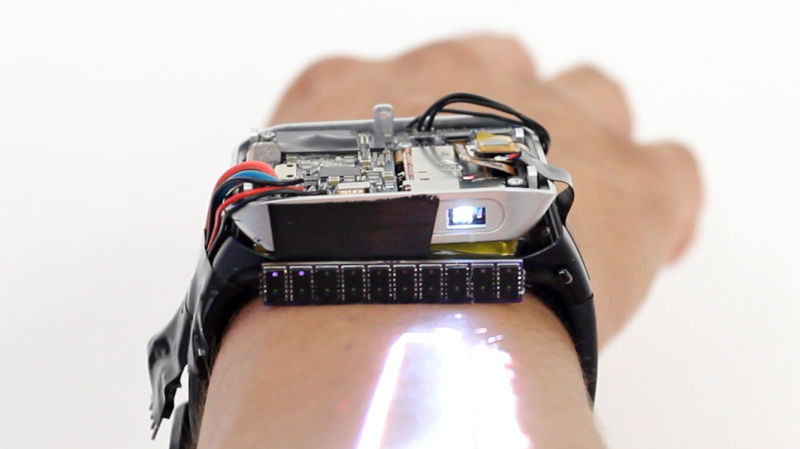 Of course, for the projector to work properly would require a calibration for each user. As they have not wanted this process to be complicated, they have designed an interface that brings to life the old “slide to block” of the iPhone, where we would have to slide our finger along the arm so that the projector and the software identify the surface. With this process the necessary calculations for the calibration would be enhanced every time we put on the watch.

This LumiWatch prototype has been created by researchers from Carnegie Mellon University in collaboration with ASU Tech Co. Ltd. of China. The size is bigger than the 42-millimeter Apple Watch, because here we have a 50-millimeter box, but the interesting thing is that it does not have a screen, but everything is based on the use of the laser picoprojector with 15 lumens and a matrix of 10 elements sensors.

Inside we would find a quad-core processor running on Android 5.1 and a battery that, according to its creators, would give us an autonomy of a whole day under an average use and up to one hour in continuous projection. Its managers say that today, this smartwatch would cost 600 dollars, counting only the components and software.

It is worth mentioning that this is a research project with a prototype at a very early stage of development, so there are still no plans to create a commercial device or sell this technology. The objective so far is to create and devise a more friendly form of interaction within the smartwatches or wearables, and thus not depend on the classic screens.