LG V30 vs Samsung Galaxy S8: High competition in the two references of design without frames

The product of the IFA 2017, undoubtedly the LG V30, had a pending account: face the Samsung Galaxy S8 +, the reference high-end smartphone model today. And what better scenario than Berlin to put them face to face.

The two design flagships without frames

LG started the rush for reduced frames and the Galaxy S8 + was the one who definitely imposed the curvature on the sides to give a touch of differentiating design. Now, in mid-2017, both the LG V30 and the Samsung Galaxy S8 + can be said to be among the best in the market, perhaps with the Xiaomi Mi Mix , in terms of the most innovative and eye-catching design in the world of the range smartphone high.

The approximation made by both high reference range is identical: elongated format, screen without borders and the use of glass on the back reinforced with metal at the almost non-existent edges to give consistency to the whole.

Perhaps the only difference is in the choice of location for the fingerprint sensor. While Samsung chose to leave it higher, right next to the camera module, the LG V30 lowers it somewhat and makes it more direct and intuitive to access. Although in the time we have with the Samsung Galaxy S8 + we have managed to get used to and hit the first and automatically with the placement of the finger on the fingerprint sensor instead of on the camera lens, which avoids the obsession with the cleaning of that element. 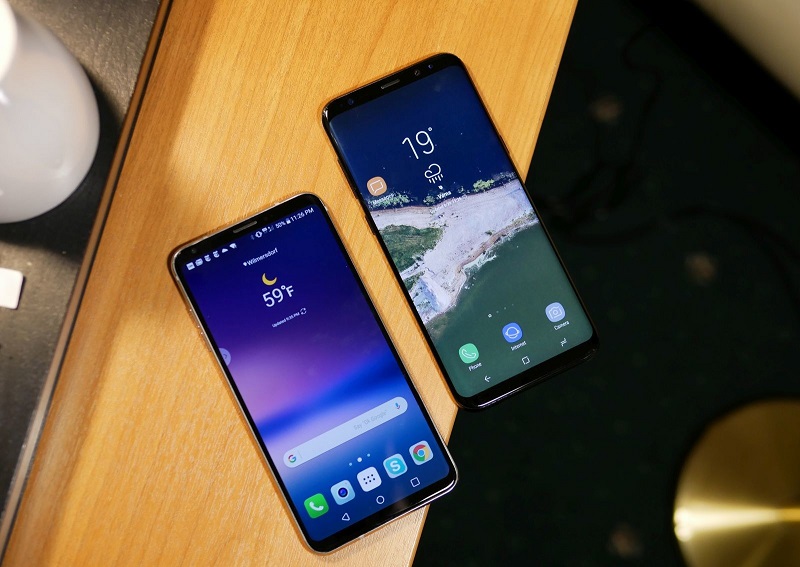 Beyond question of size, where there is no direct comparison to be the diagonal of the LG V30 located in the middle of the two Galaxy S8, the technology of the panel is what causes a direct confrontation between two of the serious candidates for best phone of the year from now on We are talking about OLED panels, an essential technology right now for every manufacturer that wants to innovate in the design of their screens, especially if there is curvature in between.

Until now, the undisputed king and champion of OLED technology on smartphones was Samsung with its SuperAMOLED, a reference of quality for years. With basically the same technology, LG introduces the OLED in its V30 with the same objective: more flexible panel and of course a leap of quality in contrast and spectacularity.

If Apple finally bet on the OLED screen in its future iPhone 8, we will be in this 2017 before an authentic revolution of which until now only Samsung had benefited with SuperAMOLED, current market reference until someone is willing to say otherwise.

In the other aspects they almost go hand in hand, with use of the front for the screen in more than 80% in both cases, and that elongated and narrow screen format that has absolute prominence.

You may also like to read: LG V30: OLED screen and double camera with f1.6 to aspire to be the best of the year

Maximum equality in power and battery

In the confrontation between the LG V30 and the Samsung Galaxy S8 + the issue of the battery should not be left aside. With such risky design and the constant search for differentiation, we are going through a critical moment in terms of concern and care of the batteries. The fast charge is what is being enhanced right now, but we must not forget the capacity of each battery.

Between these two ships the difference is not much : 3300 mAh for the LG V30 for the 3000 mAh of the Samsung model. In the absence of testing the LG V30 thoroughly, the forecasts are of maximum equality, especially when the interior is quite similar in terms of processor and RAM. Here there is hardly any difference between processor power, RAM (4 GB) or internal capacity, 64 GB with the possibility of extending it with microSD cards.

Question of number of cameras

With much equality in almost all the sections seen so far, the camera can be the trick that plays for or against one of these two great rivals. Here the data is very clear: two cameras by the LG V30 compared to the only one enjoyed by the Samsung Galaxy S8 family. The Samsung remains in theory somewhat behind what is already a trend in the high range.

But reality is no longer as unbalancing. In our first tests with the LG V30 (remember that it is a pre-production unit that always improves in the final version, especially in software aspects), the camera seems to be somewhat below the Galaxy S8 in night mode. The rival is very strong, we have seen in our comparison of cameras, so for now that impressive f1.6 does not have all the effects we expected.

Yes it gives us more play in creativity, highlight of the LG V30 thanks to that second camera with wide angle, which adds to the more “perfect” bokeh that we could achieve with a f1.6 of the main camera. You can also take advantage of the LG V30 video “tricks”, but you have to try them more thoroughly.

A point that should never be forgotten and that LG has been very concerned about in this high-end terminal is sound. Let’s see if many more manufacturers are impregnated with that idea because it is very much appreciated.