Home Tech News The Apple of Jobs against Apple Tim Cook: An Analysis with all data

The Apple of Jobs against Apple Tim Cook: An Analysis with all data

On October 4, 2011, five years ago, Apple presented the iPhone 4S. The new terminal remained in the background in the absence of until a few weeks before Apple’s CEO. Steve Jobs had left into the hands of Tim Cook for the first time and was not present at the keynote of an iPhone.

There was something odd about the atmosphere of the presentation. The manager of the new terminal unveil Apple’s SVP of Marketing Phil Schiller, he was too serious at a critical time for the company. Unfortunately, the reason would know the next day, October 5: Steve Jobs had died.

No we were still conscious, was beginning one of the most media transitions from one Technology Company. One that will inevitably be compared to Steve Jobs, the founder, visionary and charismatic leader with Tim Cook, a man of intuition and architect of the incredible efficiency of Apple.

The cold numbers efficiency and profitability of Apple

Throughout this article we will compare key aspects of the last ten years of Apple. The first five correspond to the stage led by Steve Jobs, while the last five are the focus in the current CEO, Tim Cook. All data shown in the graphs correspond to the Apple fiscal year, which ends in late September. That is, the Q1 begins in October and ends in December, so Q4 2011 defines both periods.

To analyze the efficiency and profitability of Apple under the mandate of both CEOs, we have selected three metrics. During the term of Jobs, Apple generated more than 285,000 million dollars in revenue and profits almost 56,000.

Revenues exceed 912,000 million and profits are 208,000 million. Comparing both periods, we see how both income and profits have more than tripled. The reasons are obvious: the iPhone started to become a product mainstream circa 2009 and 2010, while the iPad fever from 2011 spurred further company revenue. 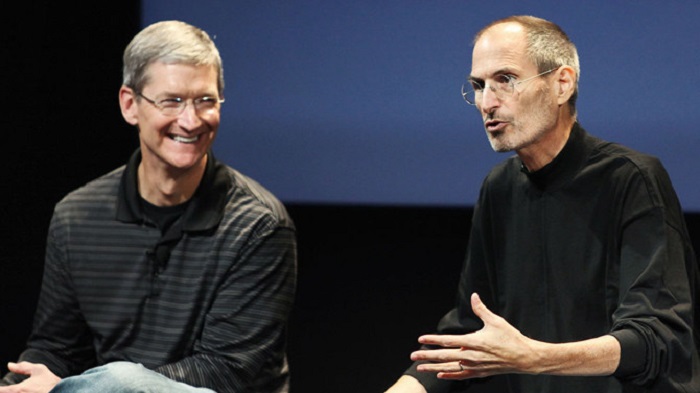 An even more remarkable achievement when you consider that still remain to close the last fiscal quarter of 2016, so that was Cook has some disadvantage. The second metric that we will analyze are the gross and net margins. Gross margin accounts for the difference between revenue and cost of goods sold. Leaves out other costs such as R & D, management and operating costs.

With an average gross margin of 35.6% and 16.8% respectively, Apple was a real moneymaker. In industry, any hardware manufacturer has these margins, where perhaps the exception of the rule is that Samsung is about a figure (if no losses). The upward trend of both metrics is quite clear.

Even more surprising is the period under Tim Cook. Both margins begin to fall in the first quarters to stabilize, giving them an average of 40% for gross and 22.7% for net. Almost five points above Jobs.

As happens in the graphs of revenue and profits, peaks generally correspond to the Q1, the quarter of the Christmas season. It is also important to note that the iPhone and iPad in its early years were launched in summer and spring, at least until Apple decided to change his schedule to orient products later this year.

The third metric gives a very interesting information. It is investing in R & D. During the era of Steve Jobs, Apple invested over 8,000 million dollars. A “small” fraction when compared to the nearly 30,000 million Tim Cook. Here you can have a very interesting debate about whether Apple continues to innovate or not.

Although it can be argued that a higher budget may not reflect the growth of Apple correctly. That’s why we compare with the benefits of the company and the top graph is obtained. Apple now is investing a percentage of their profits in R & D increasing. Numbers that leave no place in good arguments about the company’s focus on money rather than innovate. If this were the case, Tim Cook could make up the numbers sacrificing short – term investment in R & D, affecting the creation of new products long term.

The conclusion is clear: in the direction of both CEOs, Apple has gone from being a very profitable to be a technology company more profitable yet. Margins enjoyed by Apple are unknown in the hardware sector and look more like software companies like Microsoft.

Although here we must note that Apple does not sell only hardware but also software and services. MacOS, iOS, watchOS, TVOS. Siri, iCloud, iMessage, Apple Music. Not to forget accessories like Beats, Apple Pencil or the countless covers for all its products.

Despite records and good results in recent quarters Apple has seen its numbers stagnate. Mainly dragged down by falling sales of iPhone in a smartphone market that is stagnant.

The most important releases of each era

Revenues, profits, margins and R & D. They tell part of the story of the two leaders but not all. They are a result of the vision of the company always focused on the product. During the last ten years, Apple has launched numerous products inaugurating categories, but also software and services that accompany them.

Under the ten years we are analyzing, Steve Jobs and Tim Cook have launched four major products. For the founder of Apple, we have selected the most important two of this period: iPhone and iPad For Tim Cook, Apple Watch and Apple Music.

Before moving on to analyze these four pitches, it is important to note that the iPhone is the device most successful in the history of Apple. Although now having problems, achieve the same level of sales and earnings will be extremely difficult, both for Apple and for any other company.

You may also like to read another article on iMindSoft: iPhone revenues fall 23%, the worst quarter in the history of Apple device

If we analyze the two major products presented under the age of Tim Cook, the comparison becomes more complicated. Apple does not give official sales figures for the Apple Watch, although some analysts as Canalys claim that sold at least 12 million units in 2015 (with only 8 months on sale), for a total of about 17 million to the first half of 2016.

They do not seem too many units, but these first five quarters of life of the Apple Watch are more than twice Apple iPhone units sold in the corresponding period. They are also enough to be placed on the top of best – selling smartwatches, second after Fitbit market wearables in general.

Apple Music started on the wrong foot for many users. The music streaming service Apple payment received numerous critics in his debut. Despite the difficulties, Apple has managed to make it grow to 17 million users in just 15 months payment and just before it reached its full redesign with iOS 10.

Jobs was in charge of Apple for fourteen years. More than enough to build a legacy of very important products. Cook just takes five leading Apple. He still has nine years so we can compare the legacy full of both leaders. So far, we know that this month go on sale the AirPods, the second wearable Apple. And there areincessant rumors about a car that would be a revolution in the world of transport.

The role of Steve Jobs and Tim Cook on Apple

The last comparison focuses on the role played by each CEO. It is clear that Tim Cook is not Steve Jobs . Jobs was a visionary, someone who was able to see where the user would move and position your company to point in that direction. He was “a focus on the product type.”

Cook, however, and in the words of Jobs himself, is not a person focused on the product. It is the specialist operations, the wizard of the supply chain. The author of the well – oiled, efficient machine that is Apple. So who is responsible for the products?

The answer is Jony Ive. Close friend of Jobs and current CDO (chief design officer) of the company, a title created by and for him. Ive is the heir to the vision of Jobs; a person Apple founder himself was responsible for “shield” from the rest of the company. Nobody, not even Cook, has more power than him at Apple.

In all these years we have seen how Jony Ive was gaining more and more decision – making power in the company, while it reduced its management responsibilities every day. Clarified the responsibility to lead Apple’s vision, the question about the role of Tim Cook. What is the role of the current leader of Apple?

The best way to understand Tim Cook is as a resource provider for the company. Cook is responsible for all moving parts of the company are supplied to develop the product strategy Jony Ive and his team. Something that encompasses not only financial, but also human resources, acquisition of companies and key technology.

It is also responsible for dealing with critical issues from the environment in which Apple moves: the defense of privacy and security to the FBI, the accusations of tax engineering in the EC, care for the environment, the working conditions in suppliers Apple, the defense of freedom of sexual orientation and the struggle for the integration of women and minorities in executive positions work.

Apple has lost its legendary co-founder. Tim Cook is not Steve Jobs not pretend to be. Its main function is to store the DNA of Apple, protect and grow. Jobs trusted him to carry out his biggest dream: to create a company able to resist the passage of time.